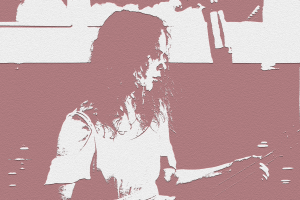 Eva Hoogland is a singer of Turkish folk music and free improvisation music. She grew up in a musical environment as her father is the pianist Stanley Hoogland who was one of the first to perform on period instruments. She received her first music lessons at the age of five.

Eva performs the music mostly in a traditional way, and researches the poetry of the songs she sings. She tries to give this poetry a prominent place in her interpretation, and is interested in differences between sung poetry interpretations, both religious as non religious, in different times and places of the world and of Turkey.

Eva does also find a contemporary approach by combining Anatolian music with free improvisation, but sometimes also completely turns to improvisation, as she improvises on the magnum opus of the Turkish composer Şevket Akıncı, the album Escher Chronicles.

Since 2017 she sings Turkish psychedelic funk folk in the band 69AY that includes saxophonist John Dikeman, and which was founded by her brother Oscar Jan Hoogland.

Eva has performed with musicians such as Sevket Akinci, Barkin Engin, and Saadet Türköz, and performed at Doek festival twice, in 2018 at the Amsterdam Bimhuis with Amagi, a project formed by Wolter Wierbos. She sang with the Hezarfen Ensemble at Borusan Music House in Istanbul, and performed at EYE Film Museum for the exhibition Shell Shock. She collaborated with the multidisciplinary studio Nohlab in various performances, in Istanbul but also in Paris at L’Atelier des Lumières as part of the Immersive Art Festival, that will take place on October 18th-24th.

On November the 25th she will sing and be curator of BimLAB 41 together with Wim Janssen at the Amsterdam Bimhuis.